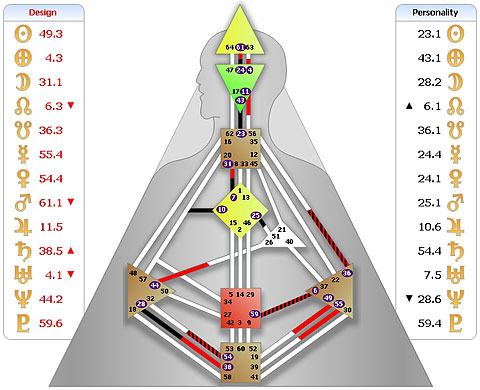 Bono has a special gift for inspiring people to consider his unique inspirational ideas, through explaining them in depth. He is a natural leader, leading the Collective towards a better future. He also has unconscious activations in coming up with logical answers mixed with endless ideas about the experiences of the past. He has a wonderfully efficient way of putting things to inspire others to change their behaviour and 'do the right thing' for the good of all. However, as a Triple Split Defintion he will struggle with anyone to be recognised as someone who never gives up once he has his goal in sight.

In addition, his third Line Definition gives him the ability to pierce anyone's aura to immediately bring things into an intimate context of trying new ways to support those in crisis. At a deeper level of analysis his cognition is attuned to understand what is really needed and his character of seeking a solid foundation to anything he investigates, means he is able to demonstrate his mastery of understanding many of the difficult problems that beset the world. As a rock star, the combination of intimacy, the ability to struggle for purpose in life and his unique singing voice projected him onto the world stage.

The key dilemma in his life is the Not-self tendency to want to prove himself to others and chase a sense of belonging that he will never have consistently in his life. An example of this can be seen in his multiple purchases of property in Ireland. His adaptable nature, combined with his brilliantly insightful mind and his natural ability to smell any bullshit from those around him, make him a formidable force for radical change. Hardwired into his design is the revolutionary social anarchist driven to align his behaviour to higher principles and reject the failed principles that have abandoned those in need.

Irish singer with group U2 and social activist, raising millions of dollars as well as awareness of the poverty, famine and need for medical care that exists in many countries.

The Group U2 was named the "Band of the '80s" by Rolling Stone magazine. With the release of "The Joshua Tree" in 1987, they achieved even greater commercial sensation. A passionate social activist, Bono prompted a historic $5 billion package from the US government to help fight poverty and disease in the world’s poorest countries.

Seen in his trademark wrap-around blue shades, with impressive communication skills, he made quite an impact on audiences at the World Economic Summit in New York, where he discussed the complexities of the global economy with the likes of Bill Gates, U.N. Secretary General Kofi Annan and Queen Noor of Jordan. A well-informed lobbyist, in June 2001 he went on a fact-finding trip to Ghana, South Africa, Uganda and Ethiopia with the U.S. Treasury Secretary, Paul O’Neill. In October 2005 he secured an interview with President George W. Bush. Bono was at ease in the interview as he always seems to be, reciting scripture, peeling off facts and figures and soliciting commitment and funds to provide debt- and famine-relief for the world’s poorest nations.

With a strong Christian conviction nurtured by his mother’s faith, Bono’s interest in social causes increased as he grew older. The result is a dual image: that of the party-hearty rock star and the dedicated idealist. U2’s 1983 album “War" included tracks with political themes. In 2000 the group participated in the Jubilee Concerts, which raised millions for debt relief in Africa. Two years later, Bono co-founded DATA (Debt, AIDs, Trade, Africa), an organization whose mission is to “raise awareness about the crises swamping Africa: unpayable debts, uncontrolled spread of AIDS and unfair trade rules which keep Africans poor.” His work earned him a nomination for the Nobel Peace Prize in 2003. And in 2005, the "Live 8" Concerts showcased the band with Bono being a major contributor to the success of the concerts in raising awareness in the industrialized world of the problems facing many of the world’s poor.