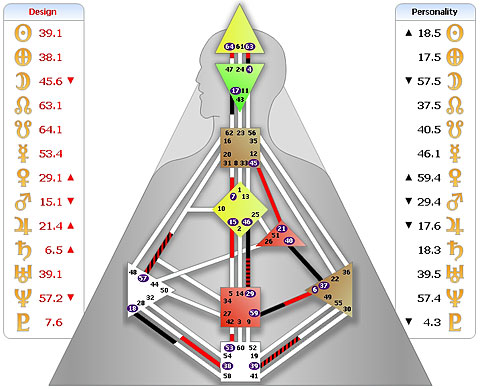 It's interesting to see he has an open spleen, so his immune system will not be naturally strong. This must have led him to explore healthy options for himself (if only he knew about PHS) in terms of what makes him better for longer. There is also the tendency for him to have certain people close to him that are not good for his wellbeing; people he may have a tendency to want with him anyway, due to them having fixed spleens and the consequent 'feel good' factor.

His open root will, no doubt, have him running around in a hurry or chasing the adrenalin buzz - certainly when he was younger you can see that in some of the band footage from his group 'Police.' Funny thing is the Police are always an adrenalin buzz when they enter anyone's life.

His definition of the 46/29 shows him to be on an experiential journey of discovery, with the 15 and 7 - to help Mankind into a better future, by disrupting the old administration and preparing to bring in a better one.

With no Individual Defintion this is primarily a Tribal/Collective being - if he bonds with you, you are an ally. If he doesn't you are excluded. The only Individual Gate is the open 38 - powerfully placed in the Design Earth and part of his Incarnation Cross. So his fight for certain causes will either work well, if he is aware of the circumstances surrounding the issues - or not, if he just flies off in opposition without due consideration. Patience is necessary to learn such fine timing.

But here we have the solar plexus - powerful Tribal emotions going all the way into manifestation. Boy, when he loses his temper it's a major amount of energy that comes out. But on the other side, this guy can bring people under his protective, warmth like few others. He has the will to do what must be done. A natural educator of people, he has done a fine job at that. Well done Sting!

Born in Newcastle, England in 1951, the son of a milkman, Gordon Matthew Sumner, grew up in the turmoil of the ship-building industry and wanted to become a musician very early. He played cruise ships, backing strippers in cabarets, and developed a love for the bass guitar. Having played in jazz/rock bands like "Last Exit" and other various groups, including a Dixieland jazz group, where he got the name "Sting" from a yellow/black striped shirt, he settled down with Stewart Copeland and Andy Summers for a decade-long tenure with the smashing rock trio, "The Police". He then went on to record solo albums and holds a reputation as one of the most literate songwriters and talented musicians in the world. He has also delved into acting, having starred in such films as Quadrophenia (1979), Radio On (1980), Plenty (1985), Giulia e Giulia (1987) (aka Julia and Julia), Dune (1984), Bring on the Night (1985) (a documentary about the formation of his Blue Turtles jazz group) and most recently, The Grotesque (1995), where he plays a bisexual, conniving butler.

Sting is married to film producer Trudie Styler and has six children with Trudie and ex-wife, actress Frances Tomelty. Sting owns a Jacobian castle in Wiltshire, which he calls "Lake House", where he records his albums, a place in London, an apartment in New York, a place on the beach in Malibu, California, and a Renaissance Florentine Villa called "Palagio" in Figline Valdarno, Tuscany, Italy. He has been called pretentious and is accused of intellectual arrogance for stepping into territory not usually covered by "pop stars".

Sting's Charity work includes: 1. He co-founded The Rainforest Foundation with his wife Trudie, to help save rainforests in South America. An annual benefit concert is held for the Foundation and the singer had a species of Colombian tree frog, Dendropsophus stingi, named after him in recognition of his “commitment and efforts to save the rain forest”. 2. Sting sang on “Do They Know It’s Christmas?” – the hit single from “Band Aid” which eventually led to the Live Aid Concert in July 1985, in which Sting also took part. 3. He was inspired to start working for humanitarian causes through concerts after seeing the “Secret Policeman’s Ball” – Amnesty International's famous benefit concert – in 1979. Following this, he took part in the Secret Policeman’s Other Ball in 1981. 4. He then headlined Amnesty’s Conspiracy of Hope tour in 1986. 5. He joined the six-week world Human Rights Now! tour for Amnesty in 1988, celebrating the 40th anniversary of the signing of the Universal Declaration of Human Rights. 6. His 1988 single “They Dance Alone” chronicled the plight of the mothers, wives and daughters of the “disappeared”, the innocent victims of the Pinochet regime in Chile. 7. Sting has performed at a plethora of benefit shows, including Don Henley's Concert for Walden Woods and "Live 8". 8.Sting performed with Sheryl Crow in 2009 at Toronto’s One Night Live fund raiser to support Sunnybrook Foundation's expanding High Risk Mothers and Babies centre at Sunnybrook Hospital.