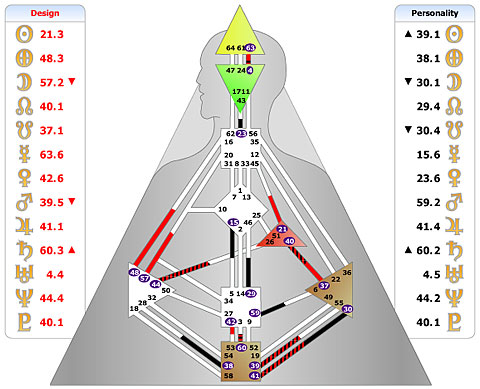 How appropriate for Diana to be known as 'The Queen of Hearts' - she certainly was for millions of people, and with her fixed will in the 21, there would be a part of her that would have loved to be Queen (the King/Queen Gate of the 45). But what a heart! The Channel of Recognition (41/30) and the Channel of Community (40/37) making her a highly emotional being who loved to be part of something larger than herself. She made the English people and those who were suffering her community over and above her beloved children. The 40/37 is also known as the Channel of the Family. It must have been devastating for her to have Charles in an intimate relationship with another woman.

She had a 1/3 character, so specialising in certain good causes and choosing where she put her energy must have been a deep process. As a Projector she would have had the need to be seen and recognised as a feeling person. No wonder the press hounded her so much - she was always 'good copy' for their newspapers. A Projector yearns for power. She had it in spades once she became more independent from Charles. It must have seemed like a completely new life when they separated. The 41/30 always wants a new experience, a new way and her Cross of Tension with the 39 provocative Gate in Disengagement must have resulted in a great deal of withdrawal from getting involved in invitations that did not fit her true self.

The open G gave her the ability to play any kind of role, with its emphasis on the 15th Gate - the Love of Humanity - something that was recognised by so many and yet it needed others around her to be activated. No set direction from the G to the throat played out in the fact that others brought the direction to her - not a problem with so many invitations coming towards her everyday. Correctly she would have waited out her emotional authority to decide which were right for her, but not knowing HD, and as a 1.3 carrying the trial and error process in her life, inevitably gave her many bumpy roads to travel along.

The open spleen would have made her long to be with someone who could make her feel secure and protected, but, as she discovered, the cost of such dependency led to a life of restraints before she could finally let it all go.

Her open throat is interesting - only the line of fusion is there as an inconsistent activation - the gradual attunement of diversity through synthesis - one can see that development as she began to create a whole new life connected to all the different charities she supported.

She had a very logical mind that would have sorted out the answers for everyone to have a better future. The campaign to ban landmines is a great example of her wide-ranging legacy in that regard. Yet it's also a mind beset with doubts and a questioning mind that, although stimulating, would have been a source of mental torture for her-self in the Not-self.

Her bulimia can be seen through the Not-self Gate 55, which her sun looked towards. When highly emotional, the inability to take in nourishment. Indeed it is not uncommon for 55s to just not eat when that emotional wave gets in. Combine this with no consistent personal identity in the open G and you have the result of someone who would try to choose an identity they wished to have - slim, pretty and eloquent would have been high up on her list to try to be. With her fixed will behind her, sure she would have naturally become bulimic in chasing the Not-self themes mentioned.

The large split in her Definition meant that she would, in the Not-self, been quite a blamer, where she would have seen whatever was going wrong was always someone else's fault. Not an easy thing to pull off when you yourself learn by making mistakes! But it also amplifies her need, both as a Projector and a Split Defintion to have people around and in support of her.

She had the Control Gate in the line of powerlessness - where the just are condemned to a futile confrontation with superior forces - being a member of the Royal family and subordinate to Charles and the Queen saw this play out at the highest level. How wonderful she found her own way to shine for 'her people' with the strong support of those 'true allies' that came around her.

Diana Spencer was born into British aristocracy, though a commoner, not royal. She grew up practically next door to Queen Elizabeth II and her family, at Park House, a mansion next to the Sandringham estate of the royal family. Prince Charles was 12 years older, but Prince Andrew was closer to her age and was a childhood playmate.

After Diana's parents divorced bitterly when Diana was eight, her father gained custody of the four children. Diana did not get along well with her stepmother, nor did she do well in school, finding an interest in ballet and, according to some reports, Prince Charles, whose picture she had on the wall of her room at school. When Diana was 16, she met Prince Charles again. He had dated her older sister Sarah. She made some impression on him, but she was still too young for him to date.

After Diana left school, she moved to London, and worked as a housekeeper, nanny and kindergarten teacher's aide. She lived in a house purchased by her father and had three roommates. In 1980, Diana and Charles met again when she visited her sister, whose husband worked for the queen. They began to date and six months later he proposed. They were married July 29, 1981, in what's been called the "wedding of the century." She was the first British citizen to marry an heir to the British throne in almost 300 years.

Diana immediately began making public appearances, despite her awkwardness with being in the public eye. One of her first official visits was to the funeral of Princess Grace of Monaco. Diana became pregnant, giving birth to Prince William in 1982 and then to Prince Henry in 1984. Dropping in weight by thirty pounds after the birth of Prince William, she began to struggle with bulimia, but also became more popular as a fashion figure.

Early in their marriage, Diana and Charles were seen to be publicly affectionate; by 1986, their time apart and coolness when together were obvious. The 1992 publication of Andrew Morton's biography of Diana revealed the story of Charles' long affair with Camilla Parker Bowles, and alleged that Diana had made suicide attempts. By December, the couple, obviously with the consent of the Queen and consultation with government officials, had agreed to a legal separation, though disclaiming plans for a divorce.

But by 1996, during television interviews by Charles and then Diana, revealing photographs and continuing scandal coverage by the press, it was clear that a divorce was imminent. Diana announced her agreement to a divorce in February, surprising the Queen whom she had not informed before making the announcement.

The divorce was final in August of 1996. Settlement terms reportedly included about $23 million for Diana, plus $600,000 per year. She and Charles would both be active in their sons' lives. She continued to live at Kensington Palace, and was permitted to retain the title "Princess of Wales" but not "Her Royal Highness." At her divorce, she also gave up most of the charities she'd been working with, limiting herself to five, working with homelessness, AIDS, leprosy, the ballet, a hospital for children, and a cancer hospital.

In 1996, Diana became involved in the campaign to ban landmines. She visited several nations in her involvement with the anti-landmine campaign, an activity more political than the norm for the British royal family.

In early 1997, Diana was linked romantically with the 42-year-old playboy "Dodi" Fayed (Emad Mohammed al-Fayed). His father, Mohammed al-Fayed, owned Harrod's department store and the Ritz Hotel in Paris, among other holdings. Both had somewhat spotty ethical reputations.

Late on August 30, 1997, Diana and Dodi left the Ritz Hotel in Paris, accompanied in a car by an al-Fayed family driver and Dodi's bodyguard. They were pursued by paparazzi, and crashed in a tunnel in Paris. Diana died in the early hours of August 31.