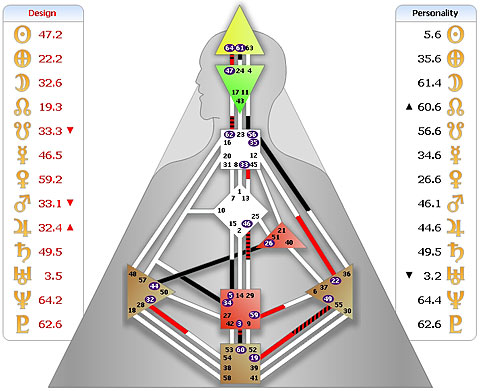 Dame Judi’s time is set at 12:00 which may mean that her time is not known, this means there is a possibility that her profile could be 6/3 or 1/3 instead of 6/2. However there is no doubt that her open G centre that remains open throughout the day shows that she has no fixed identity, a sign of someone who can mould herself to any role. She has an excellent memory, which is perfect for some of the excessive classical parts she has played. She also has all four motors possible for a human being and so can bring a great deal of energy to any role she plays. As a Triple Split Definition she has had to come to peace with her three parts of emotional sensitivity and a necessity to bring something new and different to any character; her powerful ability to transmit her character to her audience; and a pressurised abstract mind that can be full of confusion until it makes sense eventually (no doubt she mulls over every role she plays continuously, even after the film or play is over). Her open throat centre also tells us that she has a deeply adaptive range of vocal expressions possible, all of which pass through a filter that can stimulate and excite those who hear her.

British actress, winner of a Best Supporting Actress Oscar and a Tony award for the title role in "Iris." Known for great classical roles, she is equally adept at comedy in TV sitcoms. In 1999, she was made Dame Judi by Queen Elizabeth II.

The daughter of a doctor, she had two older brothers, raised in a Quaker household. On February 5, 1971, she married actor Michael Williams, a 30-year relationship that lasted until his death of lung cancer in January 2001. Though she has been a headliner from the beginning of her career, she is a team player, both in her marriage and her work. She shares her London home with her daughter Tara Cressida Frances (aka Finty) and her three-year-old grandson and she cared for both her own mother and in-laws in their older years. Talkative and energetic, 5' 1", she is known for a robust sense of humor. She has old-fashioned diversions; embroidery and letter writing with pen and paper.

Judi began her work in classical theater, the Old Vic, in 1957 doing Shakespeare. She and Michael were in love for nine years before they married in 1971, both establishing their craft. Gradually film and TV took precedence over the stage, though she did character roles for years before moving, as a mature adult, into starring roles.

She has been winning awards and honorary degrees since 1965. In 1970, she was awarded the OBE and in 1988 the DBE. In 1996, she won two Laurence Olivier awards for best actress and best actress in a musical, both for "A Little Night Music" as well as the Laurence Olivier Award for best actress, for "Absolute Hell." She won an Oscar and a Tony award in 1999 for "Shakespeare in Love" and the play "Amy's View" respectively. On October 26, 2005, she received a "Companion of Honor" award from Queen Elizabeth in a ceremony at Buckingham Palace, London.