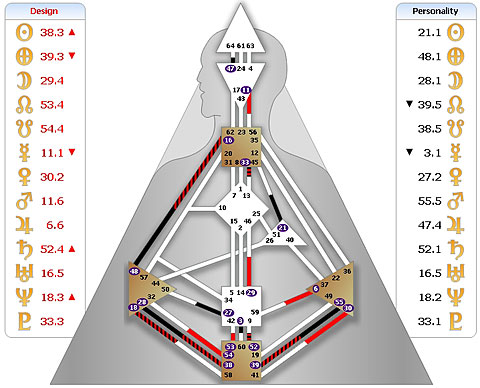 Eric Clapton has not been blessed with the easiest of Designs to live out in this lifetime. As a Manifestor on the Incarnation Cross of Tension, who is designed to learn by trial and error, he would have been both uncontrollable and especially provocative as a child. In his 'Not-self' he would create tension in those around him by trying to control them. He also has the most emotional of all channels, an adrenalised emoting that could bring the house down.

In many ways, one can see that music was a fabulous release for his emotional energy. Combined with his strong emotions Eric also has a natural ability to see the patterns in any logical sequence and bring the results of his prolific practice to glorious manifestation through his innate talent. This is someone who simply does not give up. He is able to struggle with the most difficult of problems in perfecting his musical talent. Indeed in perfecting the musical patterns, he discovers they can be universally substantiated and shared, thereby getting everyone on the same wavelength. Hence Eric's huge following.

He learns, as I've said, by trial and error, so things will go wrong, mistakes will be made. But Eric learns from them, and his mind is such that experiences from the past are beautifully exorcised in his deeply emotional, fantastically rich music. This is someone who loves to go into the depth of whatever he turns his attention to - a real resource of information and experience.

Abandoned by his parents when young, he grew up a nasty kid, getting into drugs and trouble. His heroin habit became a burden from which he withdrew in 1971-1972, and kicked in 1973 with the help of becoming a confirmed Christian.

He married Patti Boyd Harrison in 1979. His son Conor, born with Italian actress Lory Del Santo, was killed Mar 21st 1991 when he fell from a 53rd story window in New York.

The top floor of Clapton's West London home was almost completely destroyed by fire May 25th 1996. In April 1998, Clapton announced the building of an alcohol and drug rehab facility in the West Indies island of Antigua. A recovering addict himself, the center is modeled after the Betty Ford Clinic. On June 24th 1999, a collection of 100 Clapton guitars sold for $5,072,350 at auction in New York City. The amount the guitars sold for was approximately four times what most thought they would fetch at auction. The proceeds from the guitars went to the Crossroads Centre, Clapton's above-mentioned rehab facility on Antigua.

Clapton, 57 and his girlfriend, Melia McEnery, 25 welcomed daughter Julie Rose on June 12th 2001, Columbus, OH. They married at the time of her christening in early January 2002 in the Surrey village of Ripley.

In October 2009 Clapton underwent gall bladder surgery which forced him to cancel his performances at a Hall of Fame concert on October 30th.