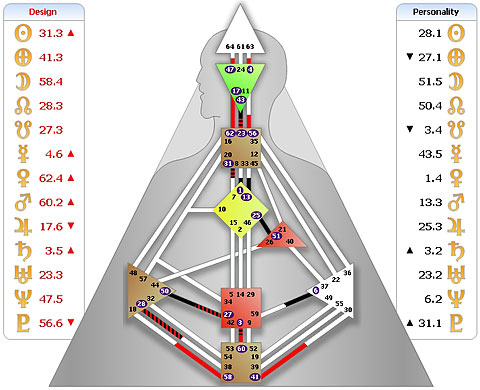 John Cleese is a Triple Split Generator with three of the four motors possible for a human being. All that energy and no direct way to the throat must lead to a tremendous frustration in trying to get his creativity out when he wants to get it out. It all depends on those people around him when he can access his will power. This is his highly competitive side; the Channel 51/25 is someone who needs to be first. His incredible mental system has the Genius to Freak Channel; a very weird mind for some incredibly new insights; equally competing with his logical organised 17/62 Mental Channel; coloured by his need to present stimulation stories in the 56th Gate and the elected leader Gate of the 31. The need to create and share his ideas must be intense.

Meanwhile the third set of definitions tells us he is a custodian - someone who can nurture projects until they can stand up for themselves and the Channel of Mutation that brings another burning need to be involved in new and creative things and people.

Clearly he is best in collaboration, but as a 1/3 he does plenty of hard work by himself too. His Personality Sun is in the Gate of Investigating the purpose of life, which with three individual channels will be pulsing on and off. So for sure he will know what depression is all about (especially with the 3/60 that can indicate manic depressives flips).

I can imagine his voice in the logical 4th Gate of Answers coming out, which is something that at first sounds perfectly reasonable, until you think about it for a second and then it sounds completely barmy. While his 47th Gate in Neptune oppresses him to try to work out what happened in the past. A born set up for being a very funny man.

Look at his root centre! All of the connections are in red, so he is unconscious about the fuel, the pressure in him to seek out a new way forward, a new experiential way; to adapt to restraints, sometimes habitually and the consistent recognition of which stimulations can be of value or being overwhelmed by too much stimulation. This is a man who can love to laugh, almost manically when he gets going.

A 1/3 who has learnt by trial and error what doesn't work... but provides a great source of humour. Let's face it, being a 1/3 without the ability to laugh at oneself would be a shame. This fellow laughs at himself and has a love of the absurd.

Consistent with his Channel and Gate definitions he is a caretaker of unique insights that lead to peculiar opinions that stimulate others. He has to be with people who are freaky like himself and as his life is fulfilled through relating and relationships, he will find a place to empower them and be empowered by them, while making a good living at the same time.

His open solar plexus shows he can get caught in trying to please others and avoiding the intimacy he actually yearns for, as he would avoid confrontation and truth. However, Cleese has done a lot of processing himself (as an ego 1.3 he is probably one of his favourite subjects to study) and some of his work is deeply profound.

To top it off, he was born on the Cross of the Unexpected. Now, you really can't expect what can happen to such people, and neither can he. Life brings so many unexpected things to them. Laugh - one would almost cry. Ho Ho!

Cleese soon landed a job writing jokes for BBC Radio. He later made the move to television, becoming a writer and performer on The Frost Report featuring David Frost. Other members of the writing staff included Graham Chapman, Eric Idle, Michael Palin, and Terry Jones. Based on weekly themes, each episode of the program would feature musical satire and sketch comedy. He also starred in At Last the 1948 Show with Chapman, Tim Brooke-Taylor and Marty Feldman in 1967.

Cleese started working on a new television venture with Chapman, Idle, Palin, Jones and Terry Gilliam. Together they developed Monty Python's Flying Circus, an outlandish comedy series featuring off-the-wall sketches and odd animation segments. At first, the BBC and the public did not know what to make of this unusual show when it debuted in October 1969. Monty Python avoided standard punchlines in their skits, which threw off audiences at the time.

At 6-feet 5-inches tall, Cleese towered over most of the cast. He often played authority figures and showed a talent for hurling insults. Cleese, with his crisp speaking style, took on a number of memorable roles, including the stuffy representative of the Ministry of Silly Walks or the consumer who buys a dead parrot. "John's performances were the linchpin of Python," Michael Palin told People.

In 1972, Cleese branched out in a new direction. He helped found Video Arts Ltd, a company that produces humorous training videos for corporations. Putting his writing and acting talents to the test, Cleese created and appeared in programs on customer service, organization and meetings among other topics. The company's videos have been used by such companies as General Motors and Saks Fifth Avenue.

During the show's third season, Cleese started to lose interest. The group often worked in teams to write the sketches, with Cleese frequently pairing up with Chapman. Chapman suffered from a drinking problem at the time. "I felt we were repeating ourselves. And also I was writing with the alcoholic, and no one else wanted to," he explained to Entertainment Weekly. He left Monty Python's Flying Circus before its fourth season.

Working with his wife Connie Booth, Cleese created a new television series, Fawlty Towers. The popular sitcom first aired in 1975 and featured Cleese as the high-strung Basil Fawlty who runs an inn with his wife (Prunella Scales). His real-life wife played a hotel waitress named Polly on the show. His marriage to Booth ended in 1978, but the two continued to work together on Fawlty Towers until 1979.

While he had been tired of the Monty Python television series, Cleese did participate in the group's film projects. He appeared in, and helped write, Monty Python and the Holy Grail (1975), Monty Python's Life of Brian (1979), and Monty Python's The Meaning of Life (1983). The films won high praise and delighted the group's ever-growing legions of fans. They are now considered some of the best comedies ever made.

Cleese had another career breakthrough in 1988 with A Fish Called Wanda. For this comedy, he starred as an English barrister who gets mixed up with criminals (Jamie Lee Curtis and Kevin Kline) who are after some stolen jewels. Michael Palin also had a supporting role in the film, which Cleese co-wrote with Charles Crichton. The comedy raked in more than $200 million at the box office and earned Cleese and Crichton an Academy Award nomination for their script.

The following year, Cleese reunited with his fellow Python colleagues to say good-bye to one of their own. Graham Chapman died of cancer in a London hospital on October 4, 1989, with Cleese, Palin, Chapman's partner David Sherlock and some of Chapman's family by his side. That December, Cleese and several other members of Python spoke at Chapman's memorial service.

In 1997, Cleese tried to recreate the success of A Fish Called Wanda in Fierce Creatures by reuniting the cast for a new comedy. Unfortunately, the film received harsh reviews and performed poorly at the box office. Cleese had better luck with other franchises, signing on in the James Bond film series as an assistant gadget expert in The World Is Not Enough (1999). In 2002's Die Another Day, he returned as Q, the chief gadget expert. He also appeared in the first two Harry Potter films as a ghost named Nearly Headless Nick.

Cleese has also enjoyed some success on American television. He won an Emmy Award in 1987 for a guest appearance on the sitcom Cheers. More recently, Cleese had a recurring role on the hit comedy Will & Grace from 2003 to 2004.

His distinctive English accent has been put to good use on several animated projects as well. In Shrek 2 (2004), Shrek the Third (2007), and Shrek Ever After (2010), Cleese voiced King Harold.

Married three times, Cleese went through a bitter divorce in 2009. His third wife, American psychotherapist Alyce Faye Eichelberger, won a roughly $20 million settlement from Cleese. He soon announced that he would go on tour to raise money to pay the alimony to his ex-wife. Cleese has two daughters, Cynthia and Camilla. Cynthia is from his marriage to Connie Booth, and Camilla is from his second marriage to Barbara Trentham.

An author of several books, Cleese contributed to 2005's The Pythons: Autobiography. He also reunited with the surviving members of Monty Python for several events in 2009 to celebrate the group's fortieth anniversary. These days, Cleese works on a variety of other projects. He continues to tour and recently made a guest appearance on the comedy series Entourage.