Maisie Williams aka Arya Stark in 'Game of Thrones' thrilled us all with her mutative evolution from 'Tom boy' girl to awesome warrior princess as she chooses the mythical path of The Prodigal (13/33) and meets Death in the mystical sects of those "with no name'. How perfect when you see her chart that she should have a keener awareness of Death than most. Her Sun shines out in the  Gate of Endings (42) in the Left Angle Cross of Limitation.

She is a Split Definition with the key themes of her life being centred around her behaviour (10) and her commitments (29). It will see her making some mistakes in this first part of her life as a 6/2 Profile in these areas. At a personal level, despite her success as an actress do not expect her to continue in a similar vein as she approaches her Saturn Return on 1st June 2026. I suspect she may either move into motherhood or possibly a political or social cause could have her making a name for herself with her mind. As someone born from the Quarter of Initiation it is through her mind that she will find real satisfaction in this life. Either way she will wish to be part of something more than herself.

This will be interesting to watch as fundamentally she is highly mutative with the 3/60 Channel of Mutation and there will always be a need for something new in her life. It is often experience as a pulsic energy that suddenly flips, so manic depression is normal for her. Indeed it is in her most melancholic moods that she finds her brilliance as a creative. She has Gate 60 four times in her chart, this is the Gate of Limitations, which is also the name of her Incarnation Cross. This can be seen as someone who breaks through limitations or someone who reminds us of our limitations and what we must accept. For instance, right now she will be exploring the realm of celebrity and wealth and seeing that it is limited in so many ways. A recent article in Metro has her already talking about this and the absolute necessity to remain 'genuine and authentic' despite the fame.

Her 6th Line Profile frames her life as a journey towards authenticity as a genuine Role Model of herself. Here's a brief extract from Metro that demonstrates the accuracy of Human Design knowledge: Chatting to an audience of 200, the actress confessed: ‘I’ve definitely said things I regret and have done things I regret, and I haven’t been the best role model at certain times. ‘When I started going to award shows where you see stars wall to wall, it’s a surreal experience. After this, she decided to change her tune, adding: ‘There’s no worse role model than not being genuine. Just do you and that’s what girls should look up to. ‘It takes the pressure off I think. That makes it sound there wasn’t a whole journey to get there – but for a long time I did play a character.’ Explaining how she tried to come across as ‘squeaky clean,’ the star went on to explain how she managed to stop putting on an act. ‘I was so set on trying to look grown up and how “I wasn’t going to ruin my life,”‘ she laughed before adding: ‘I guess it did take a lot of trying to be squeaky clean.’ ‘And last year, in my own personal life, I went though a lot of revelations where I wasn’t happy pretending everything is fine.‘But after that I think I’ve tried to be a lot more genuine. You just drop it all and that’s when you can have a lot more fun. ‘It sounds so simple, but I think it takes a lot of time.’

The 2nd Line in her Profile shows us in the 56.2 that she can be a natural when it comes to expressing herself in a stimulating way. It also tells us that she will be forever youthful in her playfulness and self-motivated tendency to live within her own bubble, no matter what else is going on. She is also likely to have a natural fondness of children and they of her.

The 46th Gate appears three times in her chart. As the diverse experiences she is going through impact her, during this somewhat intense time of her life, she will grow as a powerful character we will be hearing from on many subjects.

The Channel of the Prodigal (13/33) is fully conscious in her. This can be described as someone who will "Have a go and see what happens". She is also likely to 'embrace powerful forces' on her journey, but with an inherent vulnerability and open to emotional 'abuse' if she lets such forces ride over her will be all part of the learning process.  If you combine this with the fact that the only logical characteristic she has is the 58.1 'The Love of Life' - an incredible vitality known as joy.  But nothing else in logic. So this is not what anyone could call a 'sensible girl', at least not yet. She isn't about 'reasons' or consequences. So at this time in her life I can only imagine a 'wild child' on the loose who will be learning the hard way what does and doesn't work.

The Open Spleen shows us that she needs to take care of her physical health and certainly avoid the temptations of drugs and alcohol which she will not be able to tolerate under normal conditions. However, with an overtly pronounced Not-Self trap of the 'fear of failure' in Gate 32, we can expect her Not-Self ambition to be a driver in her life until she learns her own limitations. I presume she has some excellent alternative practitioners to help her keep in balance. and may even be experimenting with her own potential healing abilities. On the other hand, she is here to be wise about fear and in some of the 'Game of Thrones' episodes, when she was being chased by all manner of powerful foes, she portrayed terror magnificently. I'm sure the 19.1 also helped in that regard as a Gate of need and open to the most sensitive emotional field, her expression of emotion is an ongoing cutting edge for her. To be so open emotionally is to experience great difficulty dealing with the impact of others feelings on her. She will have to learn the hard way not to make decisions based on how others are feeling.

Maisie has an Open Will Centre filtered by the 21.3 Powerlessness, so it is likely she has tried to prove herself wilfully in her career to date and will be comparing herself to others a great deal. As time goes by, if she can follow her Sacral response in her decision-making process she has the potential to find her own self value in having material control over her life without living beyond her means. For sure, her GOT role should certainly have helped her in that process.

With an Open Head and Open Ajna Maisie is designed to be intellectually smart, able to measure the value of conceptual knowledge. Her mind is likely to be rather addictively repetitive and somewhat abstract or 'random' in the modern sense of the word. Certainly the potential to be innovative in the way she can make sense of the past.

I'll let Maisie have the last word as she speaks totally in alignment to who she is in the Metro interview: ‘I think dropping the act and being who you are, that’s the first step.’ Smiling at the crowd, she turned to Fearne and said: ‘Trying to be as honest with yourself as you are with other people, that’s so important.’ 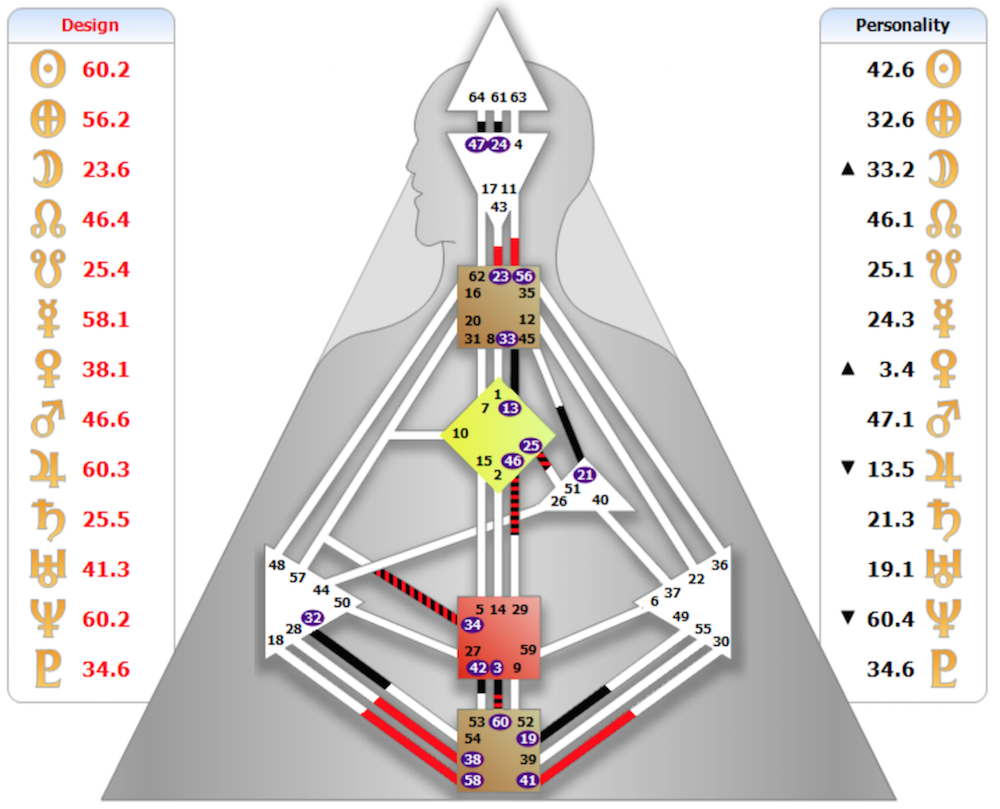