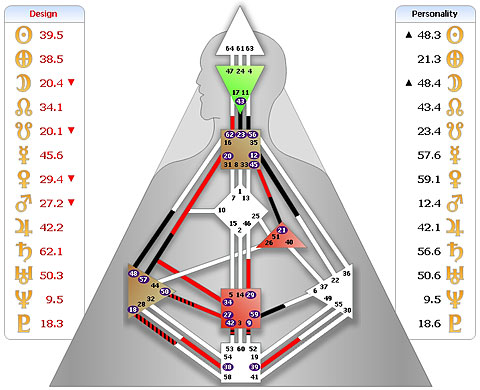 Kate has, in the Right Angle Incarnation Cross of Tension the design to provoke the spirit of her audience in whatever way suits the character she plays. A Single Definition, she is pretty self-reliant with the will power and the life force to manifest her energy. If she does so in response to what comes to her, then she will be correct and her 5th line will be perceived positively. With the 5th in her Design, there is a natural seductiveness that others will project upon her, as she projects out to them from the big screen.

Her open G centre makes her a natural performer, with no fixed way of behaving and with no way to identify a particular sense of self, there is nothing like a good script to morph into. Yet her 43/23 in the (4th line) structuring mind will always have that individual way of wanting to externalise its knowing about what should be portrayed and how. It is a one-track mind whose individual voice may say things that really have no value to others. She must have learnt that she needs guidance to succeed and indeed to know her place as performer rather than director. Mixing the two roles would not be particularly fruitful for Kate, at this early time in her life.

She has the Channel of the Custodian, and I can imagine she really cares for her characters, almost like children, loyal and integrious in keeping in character.

She has the Channel of Charisma, so always busy doing something or other is healthy for her, rushing into things however as the Not-self version will inevitably land her in lots of hot water from time to time, especially as we know what a life lived within the constraints and delights of the trial and error process can be like.

She is available to get her powerful bully tendencies out with her 34.1, not surprising then that she often plays roles that have a definite kick arse masculine air about them. This is re-enforced by having the Gate of Intimacy in the 59.1 - the pre-emptive strike, a sexual role of grabbing them by the hair and pulling them back to the cave.

The open solar plexus means she will amplify the emotions of those around her - in the Not-self the tendency to avoid confrontation and truth. In her acting career, the ability to amplfy the emotional energies on the set, to use the reservoir of emotions she has stored up over her life and allow them to come bubbling up as necessary, without attachment, but very powerfully shown on the big screen while she is in character.

Her voice throat has many activations; the ability to be stimulating, mutative and with an almost regal authority with the 56, 12 and 45. The 45.6 as a quality of voice has, in her, an unconscious air of integrity and wisdom as it speaks. She also has the Gate of Naming in the 62 - the factual voice, that can sound so certain and so cool. The existential 20 is in the shallowness of the sloganeer - again perfect for doing TV interviews about new films, especially when combined with conscious 'knower' in the 23 and her fixed will - how confident and together she can sound in public.

Privately it may be very different, uncertainty and melancholy must be present with so many individual channels, not to mention the desire to hold onto love and the chasing of the juicy emotional energy she does not have consistently in her.

The open root with just her Sun/Earth Design 39/38 Gates means she tends to become highly provocative and aggressive when under pressure. An integration being (34/57/20) naturally has a certain 'enlightened selfishness' about them, needing to be busy doing what they want to do. If her Not-self identification to following her freaky ideas combines with this then, yes the director had better have his or her boundaries well in place in dealing with Kate.

Her Personality Sun is in the 48.3 the material line of incommunicado in the Gate of Depth. Despite her successful career, her life will be full of frustrations unless she has learned that it takes a looooong time to develop the depth that is hidden deep within her.She is only in her mid-30's and her career has brought her into contact with many talented 16s who can bring out some of her depth - but there is much more there. Kate will be very vocal later on in life, very likely helping to educate others from her depth and experience.

A word of caution for Kate too; she has a vulnerability in her feet, ankles and legs - being in a hurry, running off the open root, especially as a 3rd line being usually means the chances of tripping up, falling over or getting bruises and breaks in legs and feet will always remain a possibility for her.

As an actress - a powerful fixed will, a mind that is almost photographic in her ability to retain scripts and an open G to 'become' her characters combined with a sexy body and raw power, joins with a caring, nurturing definition means only one thing - the ability to play a huge diversity of roles without ever losing that essential 'WOW factor.'

Kate Winslet, this British actress has made a point of eschewing straightforward pretty-girl parts in favor of more devilish damsels; as a result, she's built an eclectic resume; that runs the gamut from Shakespearean tragedy to modern-day mysticism and erotica.

Born into a family of thespians -- parents Roger Winslet and Sally Bridges-Winslet were both stage actors, maternal grandparents Oliver and Linda Bridges ran the Reading Repertory Theatre and uncle Robert Bridges was a fixture in London's West End theatre district -- Kate came into her talent at an early age. She scored her first professional gig at 11, dancing opposite the Honey Monster in a commercial for a kids' cereal. She started acting lessons around the same time, which led to formal training at a performing arts high school. Over the next few years she appeared on stage regularly and landed a few bit parts in sitcoms. Her first big break came at age 17, when she was cast as an obsessive adolescent in Heavenly Creatures (1994). The film, based on the true story of two fantasy-gripped girls who commit a brutal murder, received modest distribution but was roundly praised by critics.

Still a relative unknown, Winslet attended a cattle call audition the next year for Ang Lee's Sense and Sensibility (1995). She made an immediate impression on the film's star, Emma Thompson, and beat out more than a hundred other hopefuls for the part of plucky Marianne Dashwood. Her efforts were rewarded with both a British Academy Award and an Oscar nomination for Best Supporting Actress. Winslet followed up with two more period pieces, playing the rebellious heroine in Jude (1996) and Ophelia in Kenneth Branagh's Hamlet (1996).

The role that transformed Winslet from art house attraction to international star was Rose DeWitt Bukater, the passionate, rosy-cheeked aristocrat in James Cameron's Titanic(1997). Young girls the world over both idolized and identified with Winslet, swooning over all that face time opposite heartthrob Leonardo DiCaprio and noting her refreshingly healthy, un-emaciated physique. Winslet's performance also garnered a Best Actress nomination, making her the youngest actress to ever receive two Academy nods.

After the swell of unexpected attention surrounding Titanic (1997), Winslet was eager to retreat into independent projects. Rumour has it that she turned down the lead roles in both Shakespeare in Love (1998) and Anna and the King (1999) in order to play adventurous soul searchers in Hideous Kinky (1998) and Holy Smoke (1999). The former cast her as a young single mother traveling through 1960s Morocco with her daughters in tow; the latter, as a zealous follower of a guru tricked into a "deprogramming" session in the Australian outback. The next year found her back in period dress as the Marquis de Sade's chambermaid and accomplice in Quills (2000). Kate holds the distinction of being the youngest actor ever honored with four Academy Award nominations (she received her fourth at age 29.)

Off camera, Winslet is known for her mischievous pranks and familial devotion. She has two sisters, Anna Winslet and Beth Winslet (both actresses), and a brother, Joss.

In 1998, she married assistant director Jim Threapleton. They had a daughter, Mia Honey Threapleton, in October 2000. They divorced in 2001. She later married director Sam Mendes in 2003 and gave birth to their son, Joe Alfie Winslet-Mendes, later that year. After seven years of marriage, Kate announced that she and Sam amicably separated in February 2010.